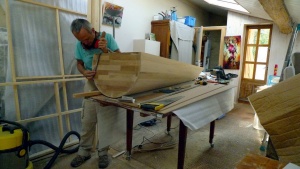 This funeral art project started ten years ago. For Thierry Virton the death is the ultimate extraordinary time of our life. And for an artist like Virton, this moment must to be an art moment too. Get buried in a simple coffin, so ugly, so sad are the actual kitsch coffins, is unthinkable. After a long period of reflection, Virton imagine a new line of a painted coffin, inspiring by mommy case and oriental art. First he became by drawing and building the model in wood. When the model was built he became – after an other period of maturation – the coffin in oak and white fir.

This luxury painted coffin, in final, took 1000 hours of work and was finished in 2015. It was called “The Szuwarski” and exhibited for the first time in 2016 in Lyon (France).